The Gerald R. Gill Papers at Digital Collections and Archives

Gerald R. Gill was a beloved faculty member in the History Department of Tufts University from 1980 to 2007. In those twenty-seven years he had a profound and lasting impact on the lives of his students and the Tufts community as a whole. This past fall Digital Collections and Archives accessioned nearly 150 boxes of material documenting Professor Gill’s life and work. The collection of papers, photographs, and digital files documents Gill’s teaching, research, and the lives and work of black faculty, staff, and students at Tufts. 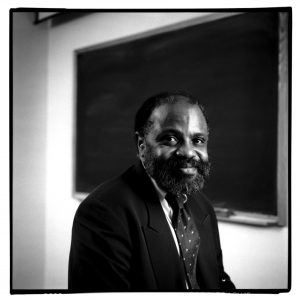 Professor Gill was well known for his mentorship of his students, and for developing relationships that often extended beyond the students’ years at Tufts. He won numerous awards for teaching at Tufts and was twice named Massachusetts Professor of the year. Professor Gill was heavily involved with community service, working with students and student groups at Tufts and serving as a frequent commentator on events and topics involving Boston’s African American community on radio, television, and at community events. Professor Gill’s papers include hundreds of letters and photographs from students who thanked him for his mentorship or just provided updates about their lives. Gill also collected material on Tufts students, alumni, and faculty of color. The flyers, photographs, and documents in the collection demonstrate the powerful connections formed between Gill and the Tufts community. 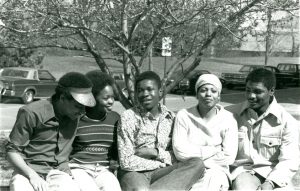 Students on the Tufts Campus. Photograph from the Gerald R. Gill Papers.

Professor Gill’s scholarship focused on African American protest movements. His dissertation, Dissent, Discontent and Disinterest: Afro-American Opposition to the United States’ Wars of the Twentieth Century, evolved into published articles and a book project. At the time of his death, he was working on a history of African American protest in Boston, Struggling Yet in Freedom’ s Birthplace: Black Protest Activities in Boston, 1930-1972. Professor Gill’s work researching the African American community at Tufts resulted in "Another Light on the Hill" published in Tufts Magazine’s sesquicentennial issue, the first major history of African American undergraduates at Tufts. As President Bacow wrote in a message to the Tufts community after Professor Gill’s death, “helped us understand Tufts and its history in ways that many had not appreciated before.” 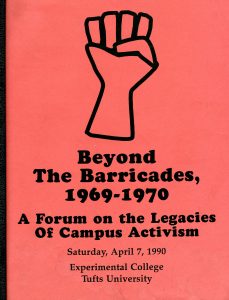 Beyond the Barricades Forum Materials, 1990

Professor Gill passed away suddenly in August 2007. In September 2016 his daughter, Ayanna Gill, donated nearly 150 boxes of records documenting his life and work to Tufts Digital Collection and Archives (DCA). Archives staff are currently working to process and describe the collection but an initial finding aid is available and the papers are open by appointment in the DCA reading room. Beginning March 31st selections from the Gill Papers will be on exhibit in the Tisch Library lobby and a celebration of the Gerald Gill and Gill Papers will take place as part of the Center for the Study of Race and Democracy’s symposium “The Past Present and Future of Black and Native Boston,” also on March 31st in Breed Memorial Hall. Digital Collections and Archives is also planning a long-term project to create an online exhibit based on Gerald Gill’s Another Light on the Hill, the first iteration of which will be available the week of March 27th. For more information on Gill Papers, please consult the finding aid or send us an email at archives@tufts.edu.